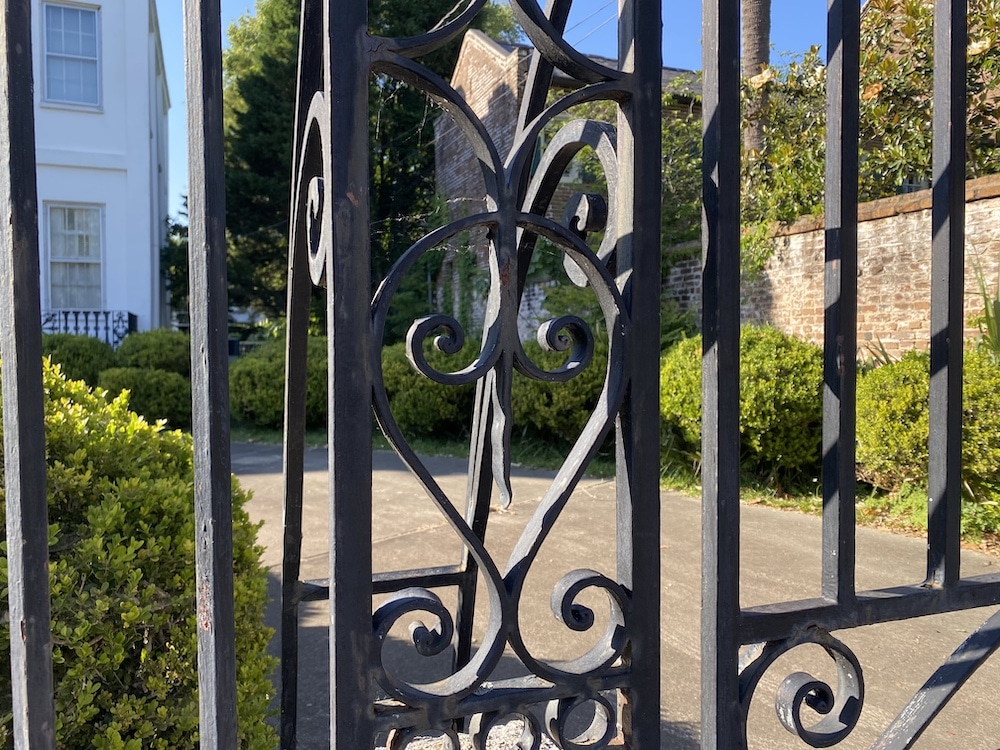 Wrought iron fences are as much of a tradition in Charleston as window boxes, colorful homes and sweet grass baskets.

You can spot the ironwork throughout the city’s fences, window grills, balconies, railings and gates that are embellished with the time-honored craft. The Jasper’s fencing along Broad Street pays tribute to this classic element of design. Once a symbol of wealth during the Colonial Era, the demand for craftsmen who harness the ornate ability to hand-forge the works of art remains strong. Today, wrought iron is a luxurious, refined accessory for Charleston’s homes, churches, banks and boutiques. This rare artistry is mastered by few, including the late craftsmen Philip Simmons, known as one of the most skilled ironworkers in the country. Philip’s remarkable gift has been a prevailing legacy throughout the Holy City and beyond.

Throughout his career, Philip designed over 500 wrought iron masterpieces and has been recognized with many honors including the South Carolina Hall of Fame and “The Order of the Palmetto,” South Carolina’s highest award. His talent and appreciation for the craft has fueled Charleston’s love for the ornamental decorations.

The Daniel Island-native realized his passion for wrought iron when he was a schoolboy in Charleston, admiring the ironwork on his walks to Buist School downtown. His curiosity grew by visiting craftsmen shops where artists blended creativity, patience and skill into beautiful works of art.

When Philip was 12 years old, he became a blacksmith apprentice to Peter Simmons, a local wheelwright. Philip learned the tradition of welding ornamental iron and began his fulfilling and passionate career during the 1930s.

During this era, wrought iron’s soaring popularity led to the rise of less expensive alternatives like cast iron and steel, but many Charleston residents maintained a fondness for the genuine craft by blacksmiths like Philip.

His iconic artistry is far different than manufactured cast iron, aluminum or steel imitations. Cast iron works are designed by pouring melted iron into a mold, whereas wrought iron is made by melding a heavy alloy with heat then hand-forging its design. The word “wrought” comes from the word “worked,” which is its significant distinction. Its beauty and respected craftsmanship make it a proud staple in the Holy City.

Philip’s work possesses more than just durable material, but a precision that makes you stop and appreciate its elegance. Next time you visit Liberty Square, the Charleston Visitor Center, or the Charleston International Airport, you’ll see Philip’s ornamental masterpieces hung on display even since his passing in 2009.

“Philip Simmons is a poet of ironwork. His ability to endow raw iron with pure lyricism is known and admired throughout, not only in South Carolina, but as evidenced by his many honors and awards, he is recognized in all of America,” said John Paul Huguley, Founder of the American College of the Building Arts.

Philip’s gift awarded him the National Heritage Fellowship, the highest honor traditional artist can receive by the National Endowment for the Arts. He is also honored in places like the National Museum of American History, the Museum of International Folk Art and the Atlanta History Center. After Philip retired from active forging, he intentionally invited tourists and students to his shop so they could learn more about the art.

When Philip passed away in 2009, his nephew and cousin, who were once his apprentices, took over his old workshop. They continue to actively forge while teaching visitors about the historic art of wrought iron decorations. Philip’s home next door was transformed into a museum for his wrought iron creations. You can also visit the Philip Simmons Memorial Garden on Anson Street, one of the most visited gardens in Charleston to witness a stunning oasis featuring fences and gates he handcrafted.